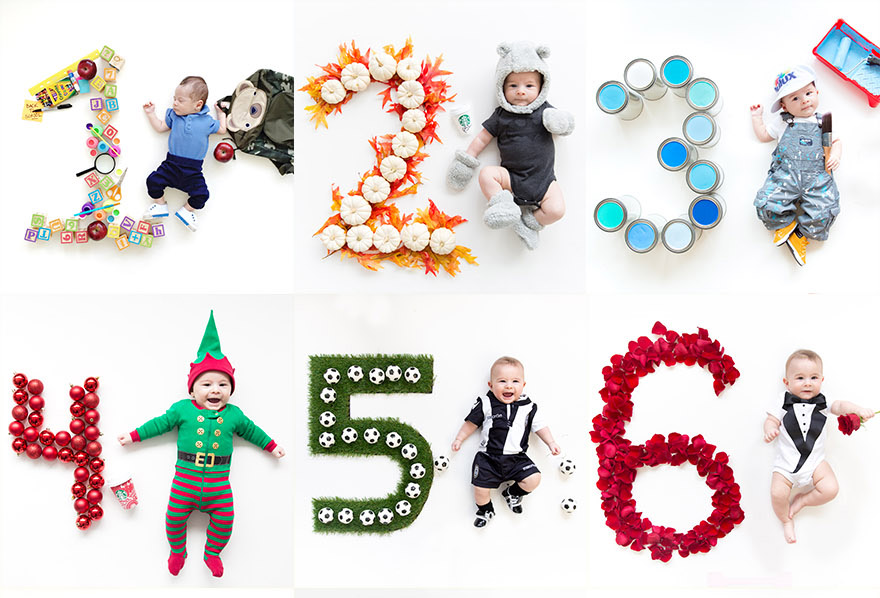 Well, this post is coming to y’all about 9 months late since J is 19 months as of March 1st.  I have quite a few back logged (promised) blog posts to get to you guys and I’m excited they are finally getting done. With every month that I posted a #bebeJmonthlysnap there would be at least 5-10 requests in my DM and emails to show how I did it.  Today I’m sharing all the tips + tricks on how to capture monthly photos for you little ones!

When I was pregnant expecting J there were few things that I had planned.  The nursery wasn’t done, I didn’t have a set birth plan and quite frankly being our first babe I didn’t know what do expect (or what we were doing).  But thanks to my photographer DNA I did have one thing planned: his monthly first year photos.  We had about 6 themes in mind and then once he was born on the 1st it became easy to think of the rest based on the holidays of the month (ex: February = Valentines Day, March = St. Patricks Day).

First I’ll give a brief description of the behind the scenes of each set up / shot and then at the bottom of the post I’ll give you some practical how-to’s along with set up, lighting and post-processing! 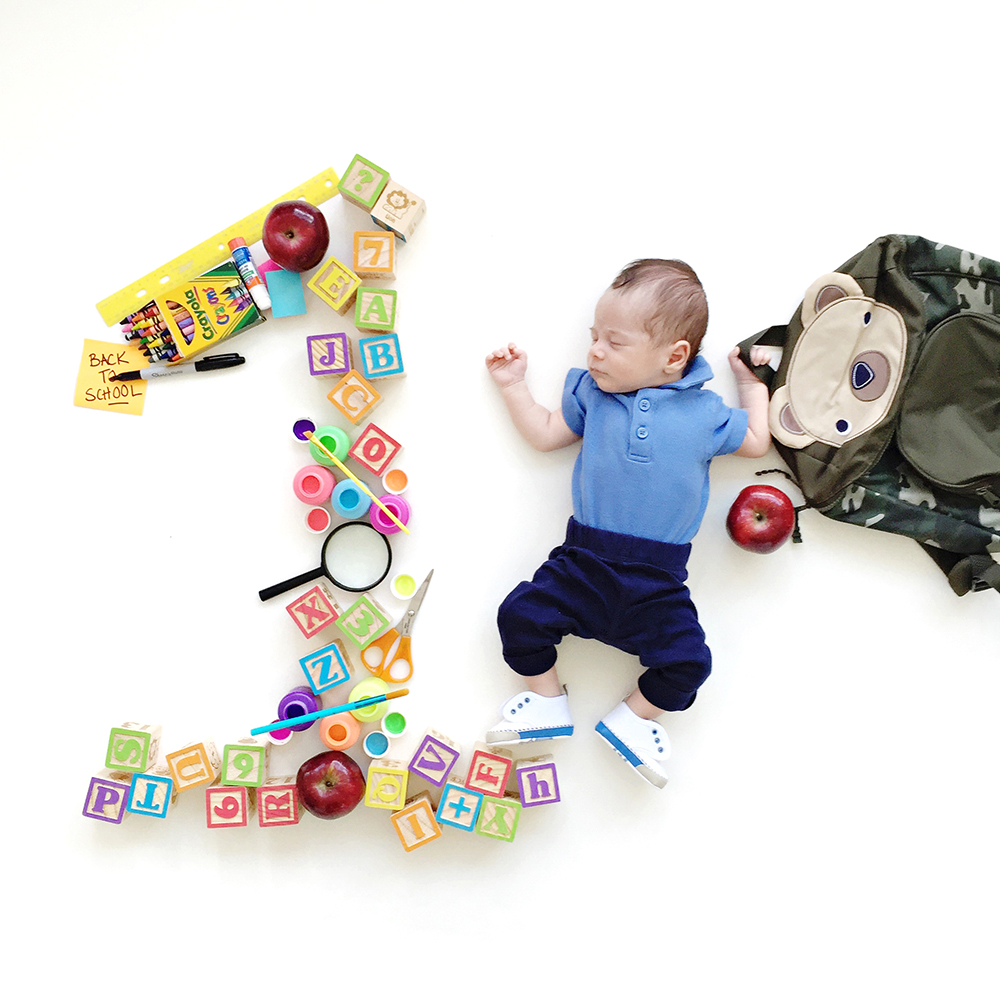 Theme: Back to School

We almost didn’t get this one done with the haze of adjusting to parenthood the first 30 days. I had a few props already at the condo but needed more to make the “1” I made an SOS call to my mom and sister and asked them to go to Staples and just bring a bunch of school supplies over and we’d figure it out.  I was quite happy with the final result and J slept through the entire thing. Success! 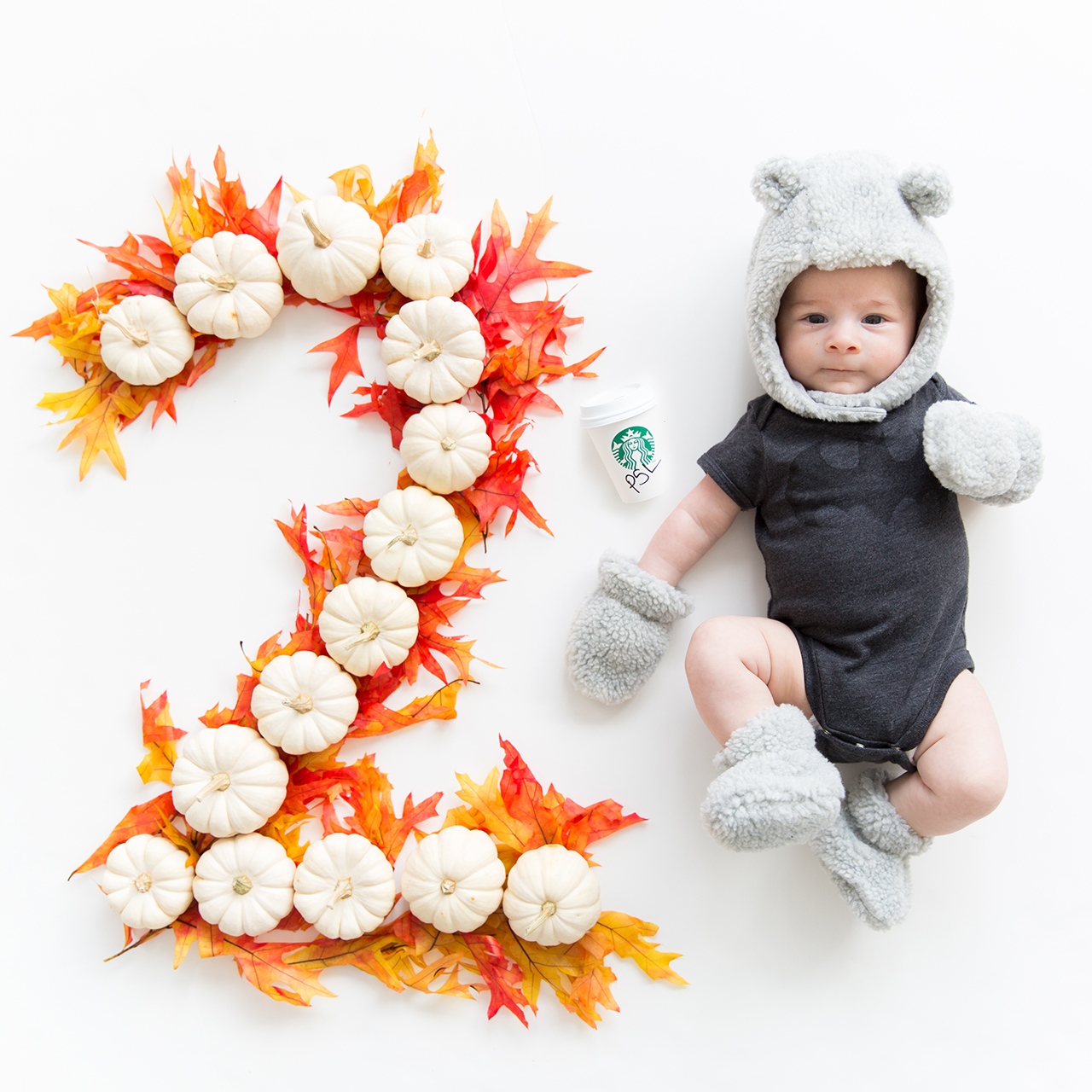 I was very excited for this one.  The hat & boots are from Gap. We got faux leaves from the dollar store and went to our local nursery to get a bag of the small white pumpkins.  My favourite detail? The tiny PSL cup! I got a short with a lid and write PSL with permanent marker. We had to get this shot really quick because as soon as we put him down he was kicking up a storm.  I saw his feet his this position and snapped a mile a minute. I love that it looks like he’s walking!! 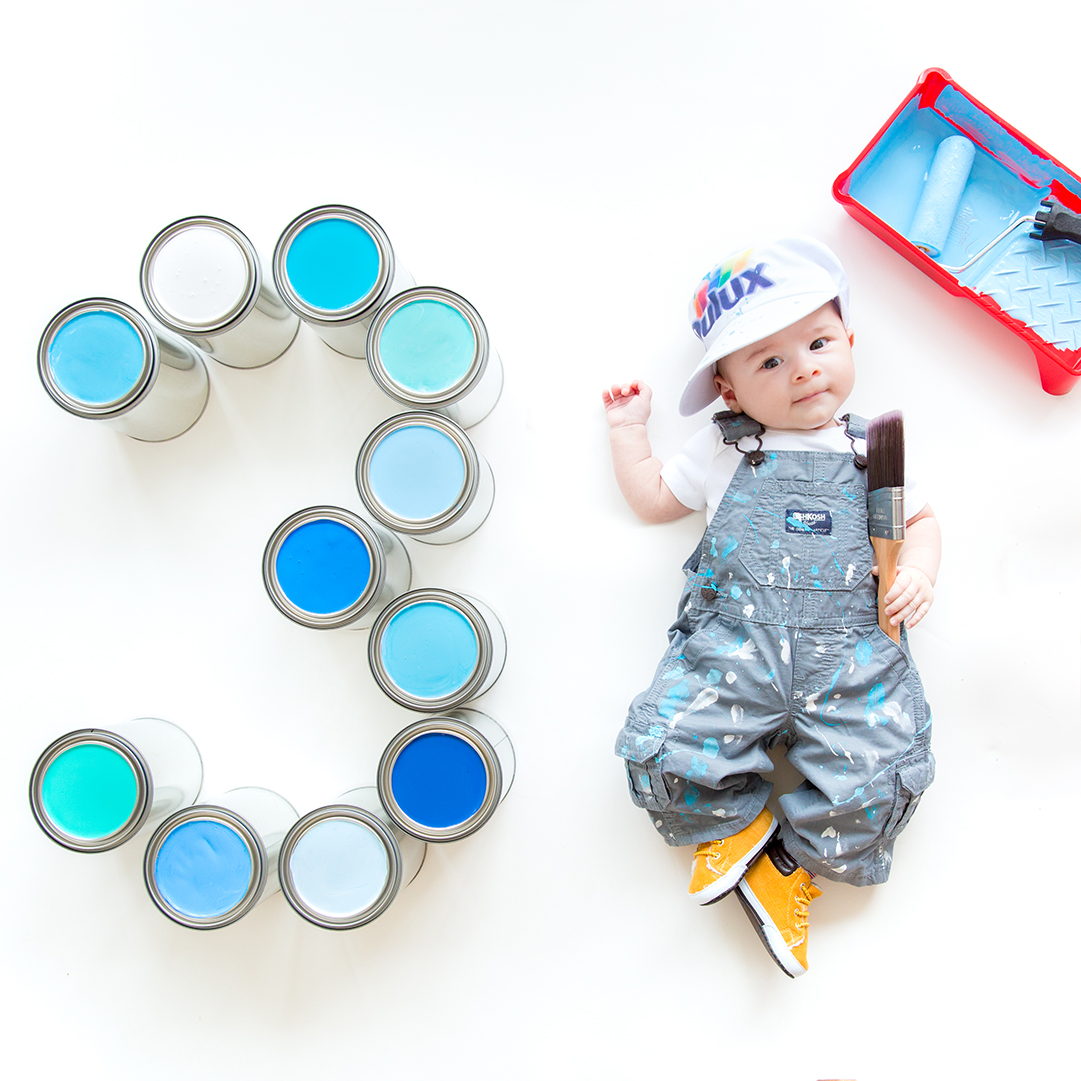 This was in honour of his dad, grand-father and great grandfather.  He comes form a long line of painters! Ko started working for his dad’s company I think at the age of 13 (crazy right?!) during his summer break.  Ko manages the family business alongside his father.  I thought it would be cute to create this for them.  I’m not going to lie, I was shocked this one came together as good as it did.  Three days before I had none of the props and started to panic. I called around all the kids stores and asked if they had overalls that were white (obviously – none had it) but Carter’s had these grey ones which were perfect.  The morning of the shoot I started splatting paint blobs on the overall (praying it would be dry by the time J woke up).  Ko brought home the paint cans and I put paint inside the lids only and mixed shades to get the ombre look.  All in all, this one turned out to be one of my favourites (and our families favourites too!) 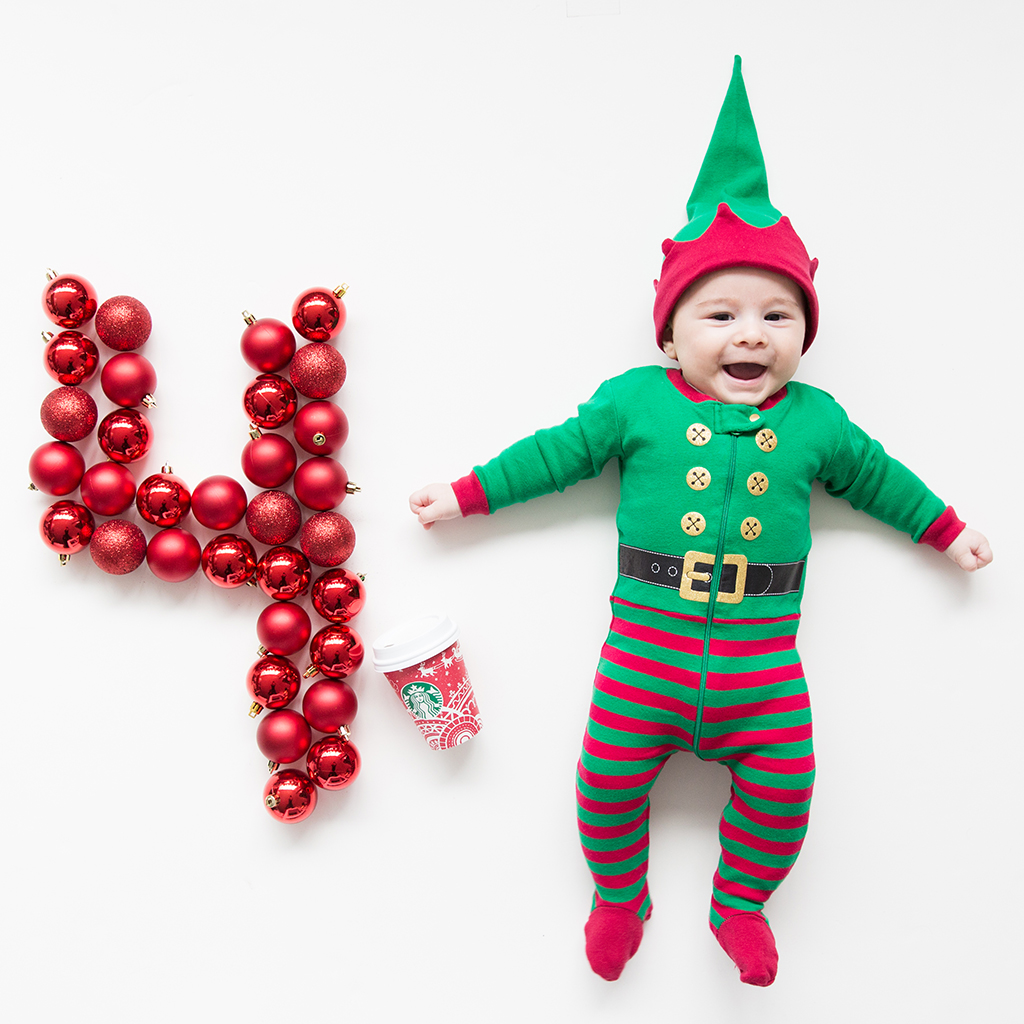 These little elf PJs were my favourite! Petit Lem had sent them to us along with a Santa pair and he wore them the entire month (including his first visit to Santa). My only regret on this shot was that I didn’t make the christmas balls bigger! It was SO hard getting them to stay put, I used sticky tac and in hindsight I should have just gone to dollarama got some larger ones and glue guned them together! Doesn’t really matter because he steals the show anyway! 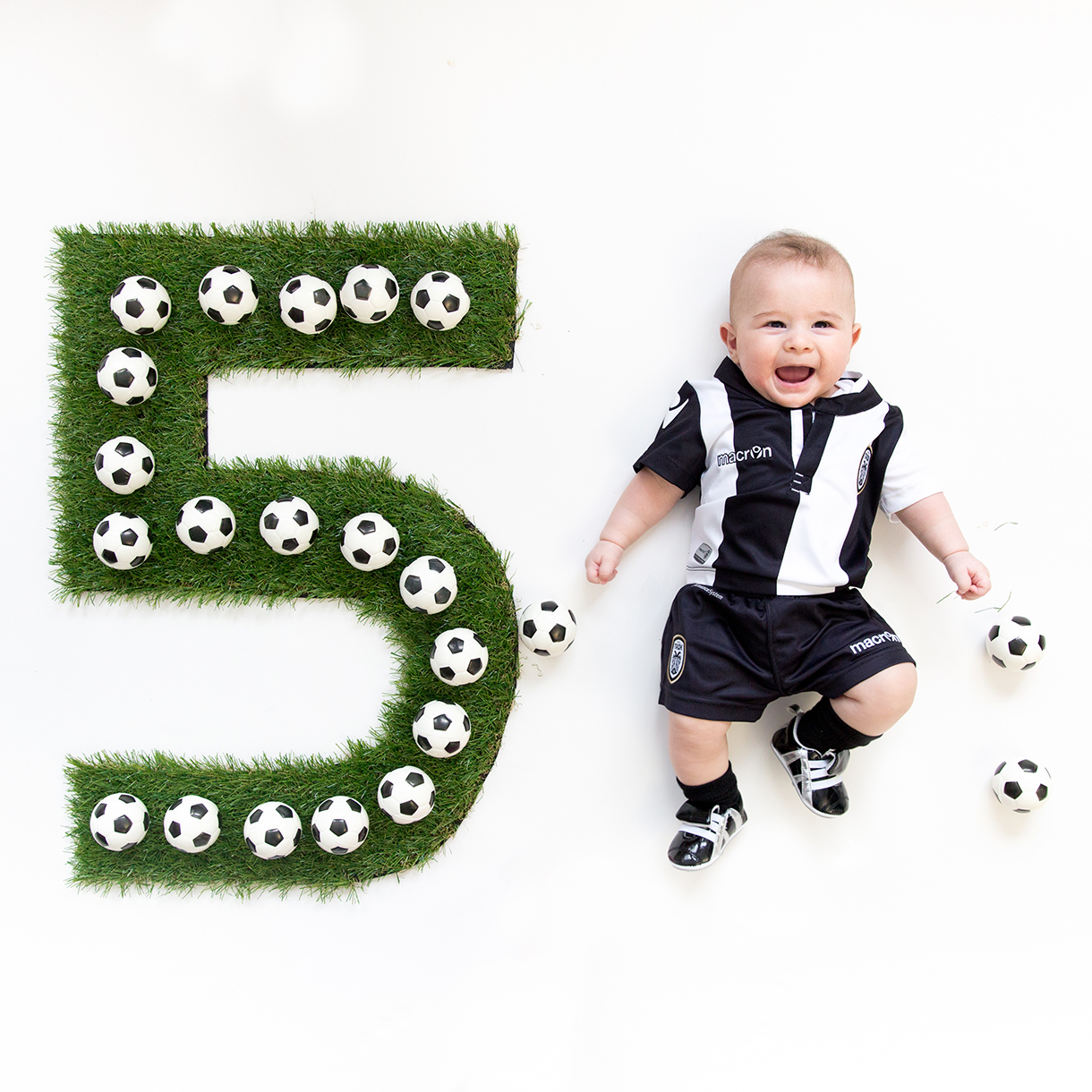 January = new fitness routines! Coming from a family who plays soccer (both mine and ko’s…not me, I’m not athletic at all) This was perfect.  When were were planning this one I asked Ko if he knew where to get faux grass.  We had ordered the soccer balls months before (we were ahead of the game for once lol) on amazon they were very cheap and we later gave them to my bestie to use for her little guys monthly photos. Anywho, Ko found a big rectangle mat of faux grass from home depot. I flipped it over and used white chalk to sketch out the 5 – Ko cut it at the warehouse with some kind of exacto-knife & voila!

**around this month is when it started getting really hard to keep him from messing up the set! He was moving and we were chasing around soccer balls the entire time.  We ended up getting two shots I pieced together which made me think of a better more sane way to do these as he got older! (I’ll cover it in April) 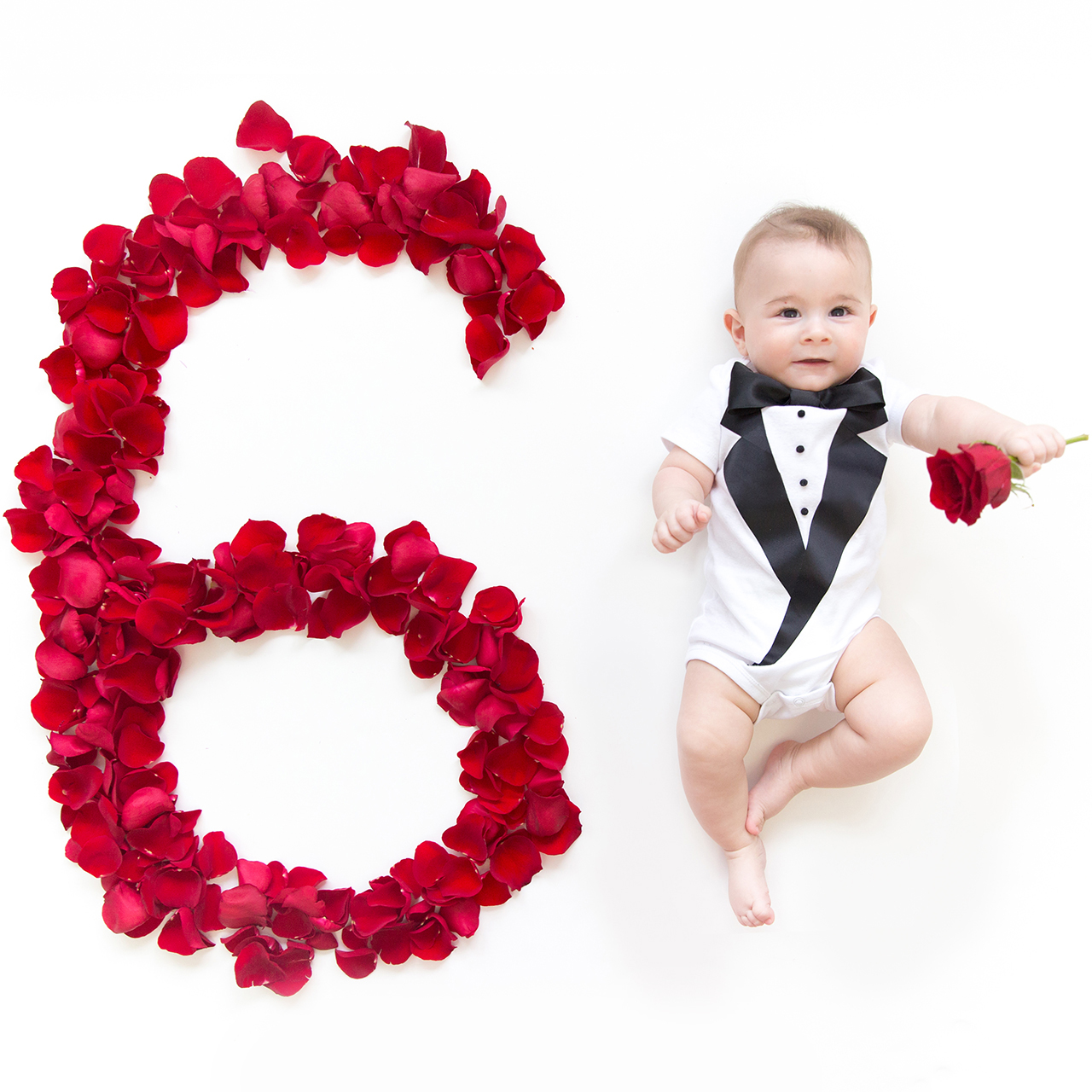 This was another one we had ready from just when he was born.  I originally wanted him to wear it for my brother’s wedding when he was only 1 month old and I think I ordered the wrong size in my new mama haze.  Turns out it worked out great we knew we’d use it for his February month photo! We had to shoot this one really fast because he tired to eat the rose and then realized it was gross and then didn’t want to hold the rose at all –> cue: baby bums over my lens <– biggest life saver ever! 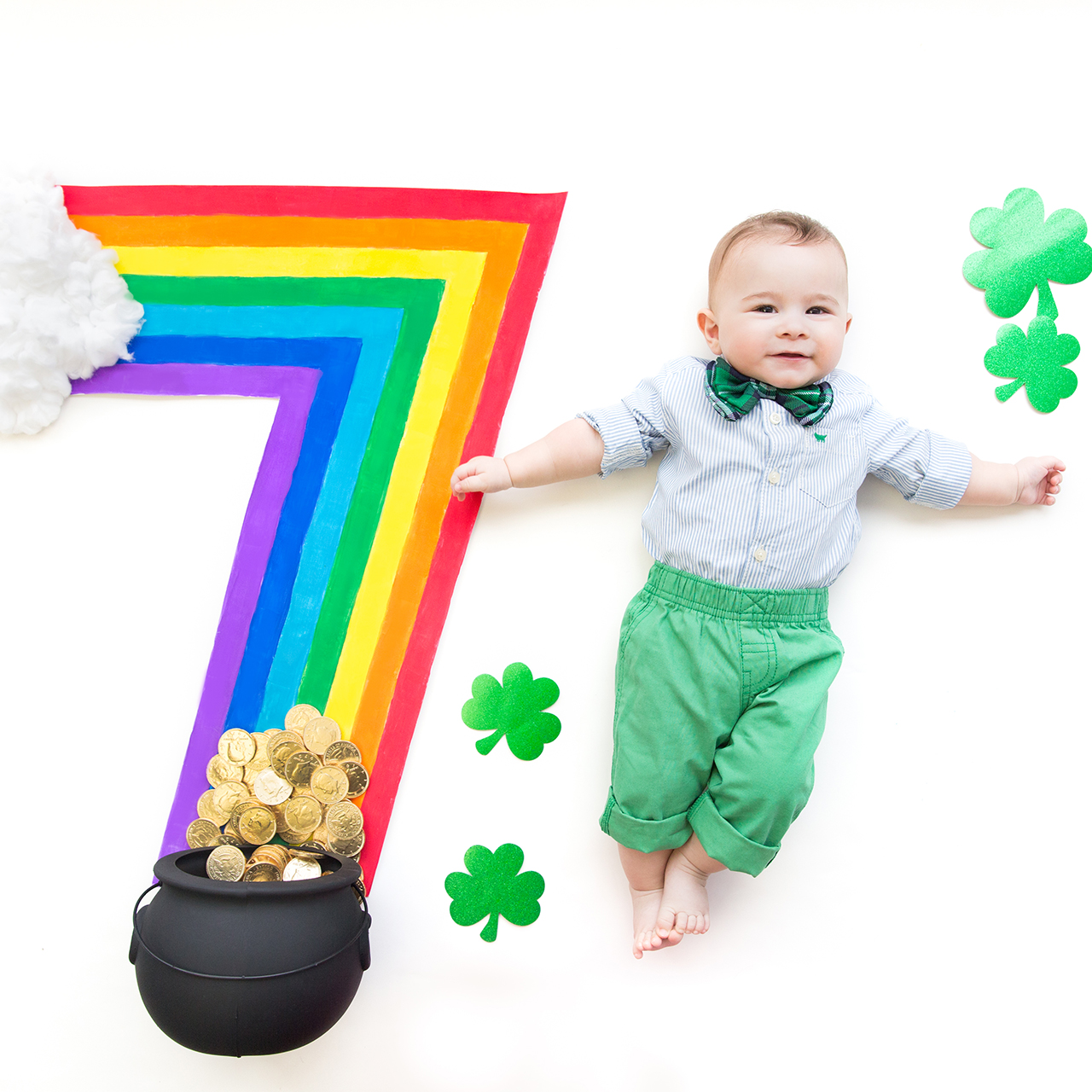 March 1st was approaching and I had absolutely no idea what to do.  We for a moment looked for a leprechaun costume to no avail, but we found some green pants and massive bow tie.  We were onto something! For the 7 I thought of a rainbow going from the clouds to the pot of gold. I got a white bristol board and my sister (the creative little artist she is) executed making it into the “7” rainbow. I used cotton balls to make the cloud on a pieces of white bristol board – we bought chocolate coins from the dollar store and that bucket was green but Ko spray painted it black and the office. Sounds like quite a bit of work but we pulled it of in 48 hrs. It was becoming a inside joke between us the crazy “madness” to get the shot! 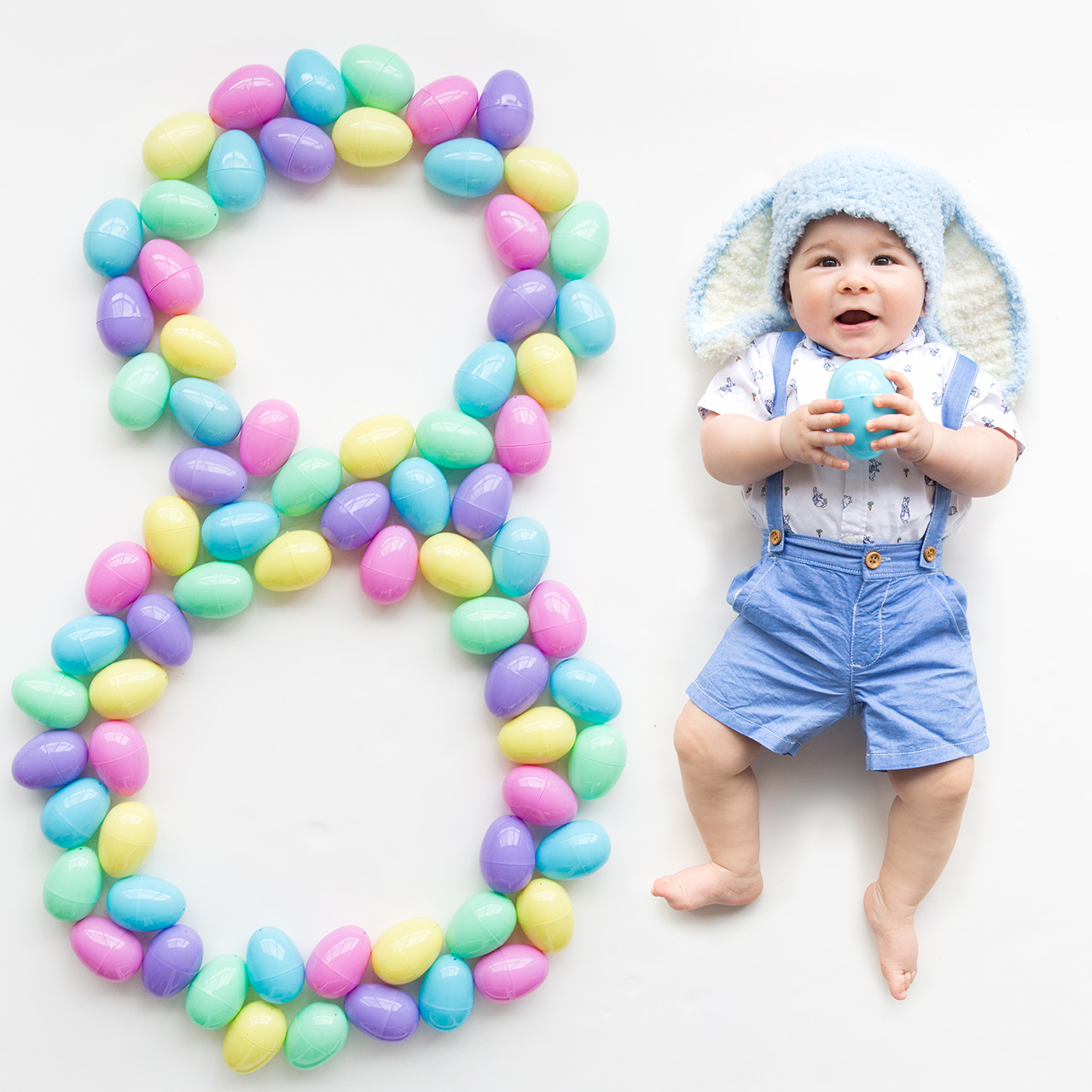 After the last minute dash of March I wanted to be prepared for April.  I spotted this outfit at Gymboree and bought it immediately knowing it would be perfect for easter + this photo and had ordered the hat the day after we photographed March (I was determined to beat the rush haha).  Having learned from the Christmas ball fiasco I glue gunned all the eggs together a few days before and we were ready to go by April 1st! 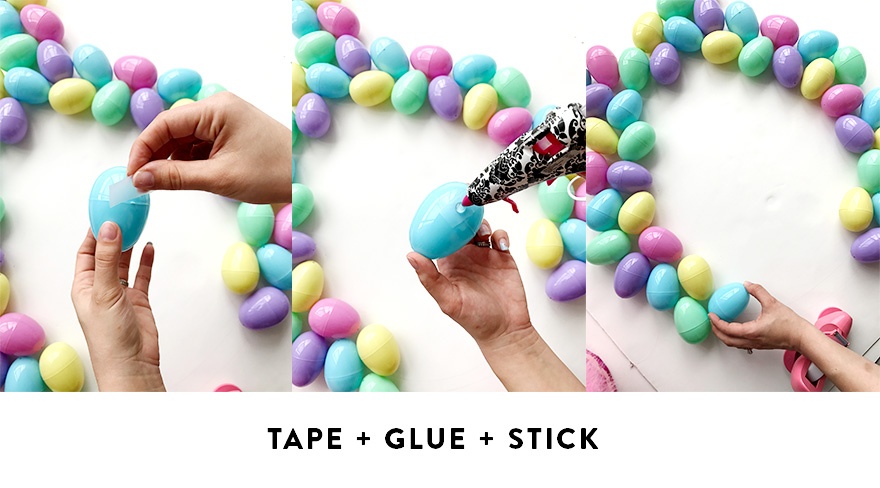 TIP: It was also this month that I stopped photographing him right next to the number – he’d wreck it and try to grab everything / eat everything / toss everything – so I would first shoo the number and them place him about 3-4 ft beside the number and shoot him separately and later put them together in photoshop! I keep the number there so it would be easier for me to place him in the final photo and keep true to his size. This was the most common comment about these photos wondering how I got him so close to the numbers – now you know and can do it too! 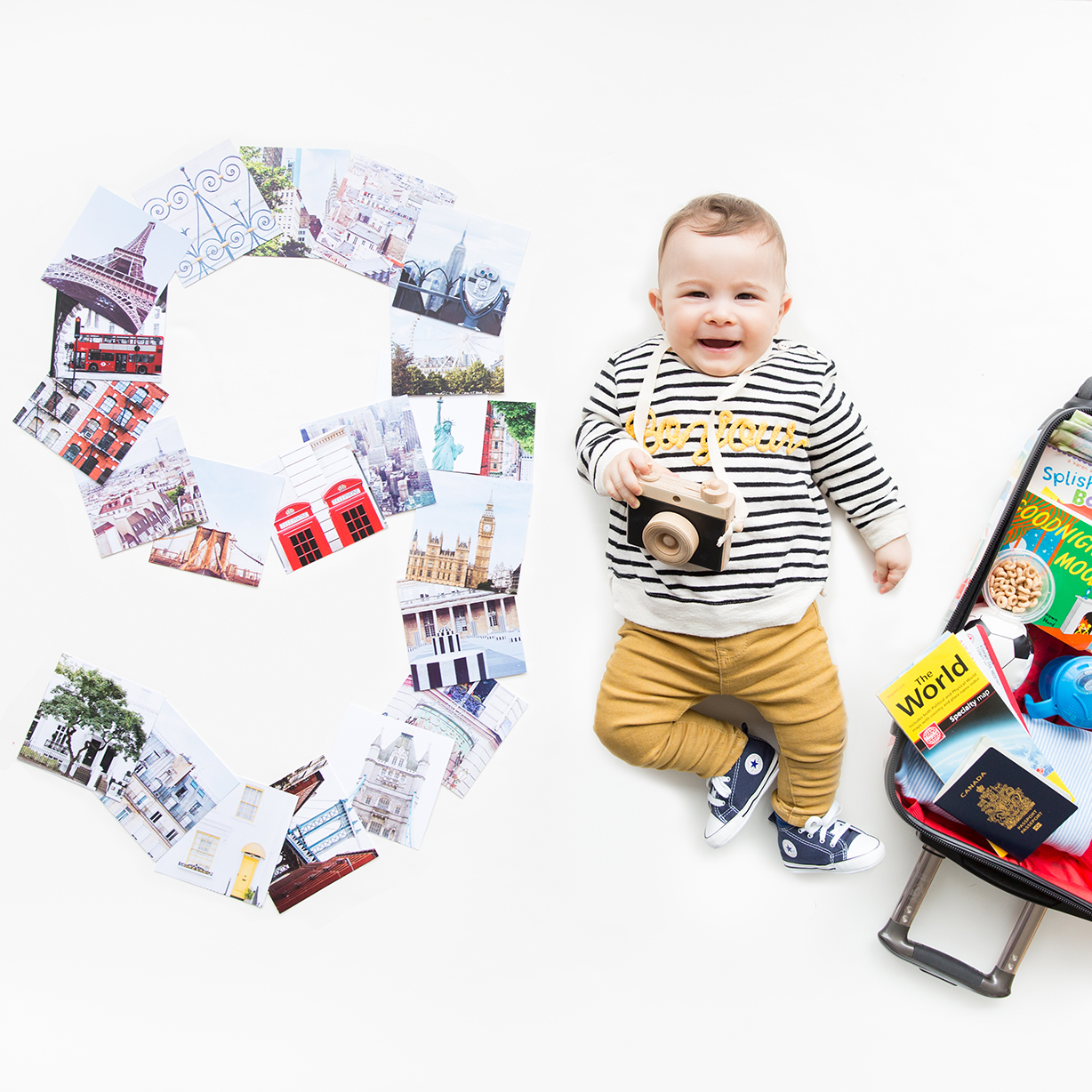 This one was for Mama. I had bought the camera for him while I was still pregnant and wanted to use it in a shot.  I had just bought him this adorable outfit from Zara so it felt fitting to create a little travel scene for our future jet-setter! We used my mini print packs for the “9”.  I cannot believe how big he’s gotten since this photo! 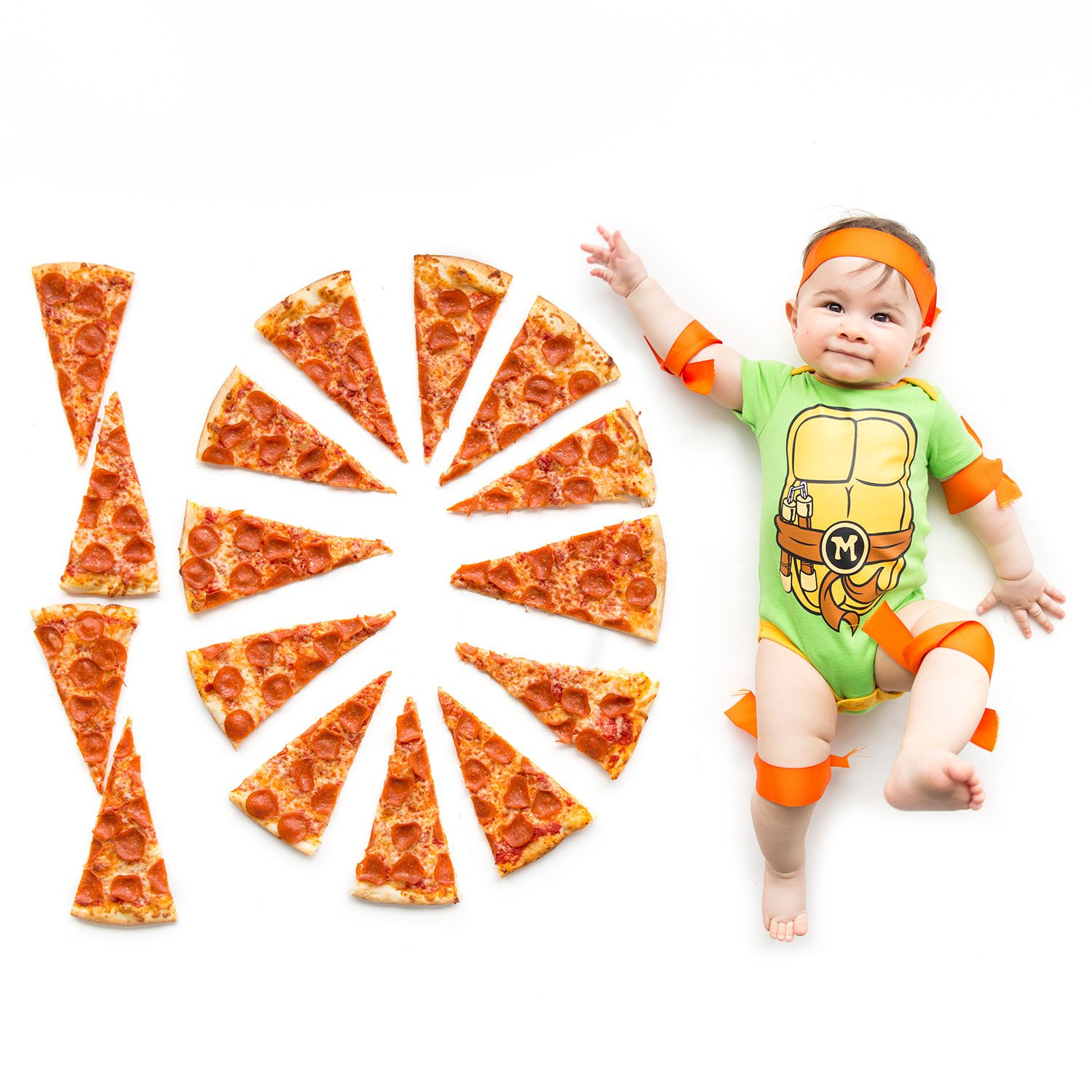 I’m not sure who was more excited about this one? Ko or myself. Him because Michelangelo was his favourite or me because of all the pizza that was left over for us to eat!  The onesie was from walmart and I used orange ribbon from michales as the head / arm bands! This is one of my favourites! 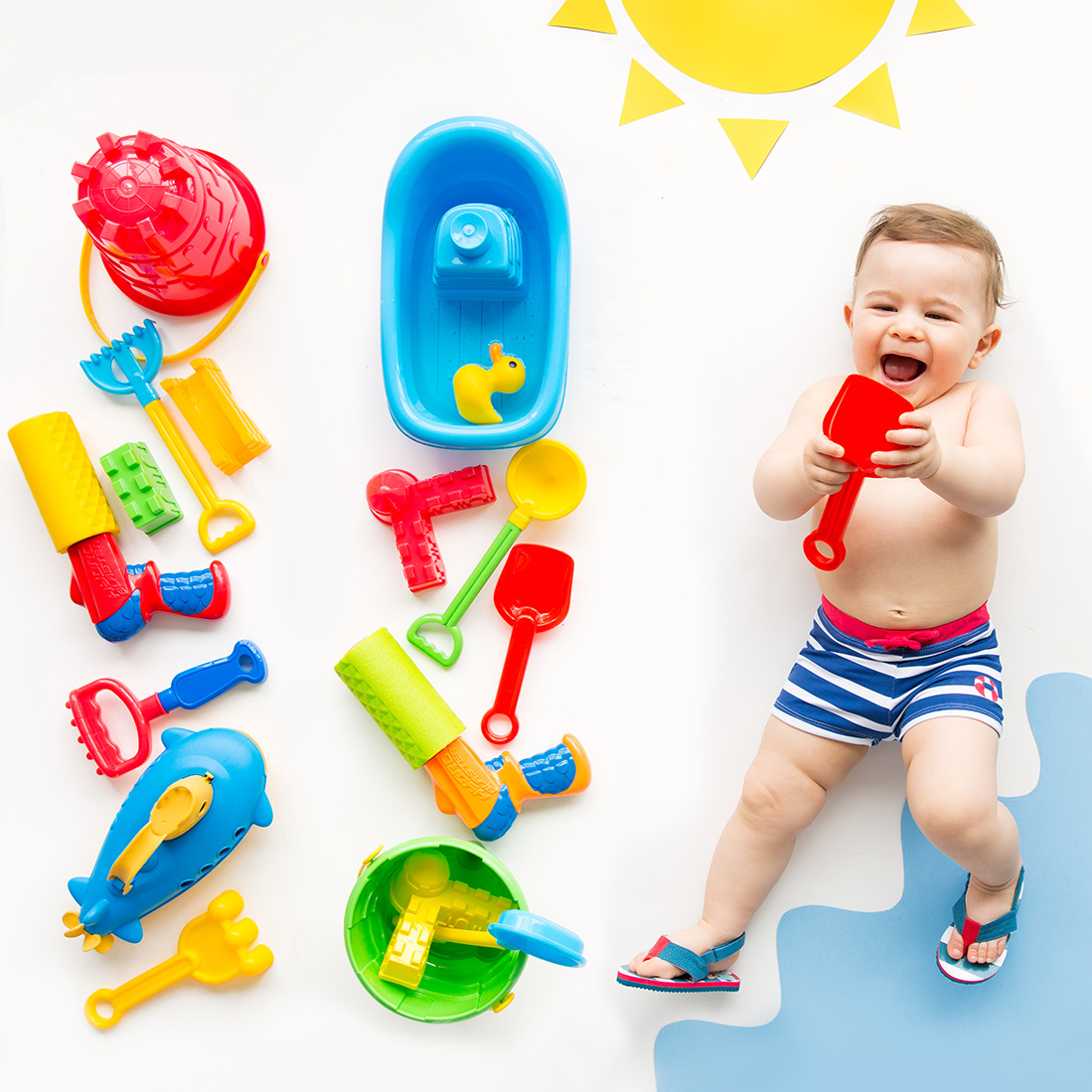 Let’s take a moment and talk about how adorable this swimsuit is?! I had bought it for my bestie’s son and we borrowed it for this shot.  I bought the sand toys and blue and yellow Bristol bard from the dollar store and cut out the water + sun! He was in such a fun mood for this one and kept laughing and being loud! He had to push away the toys completely for this one too because he was attacking them to play. 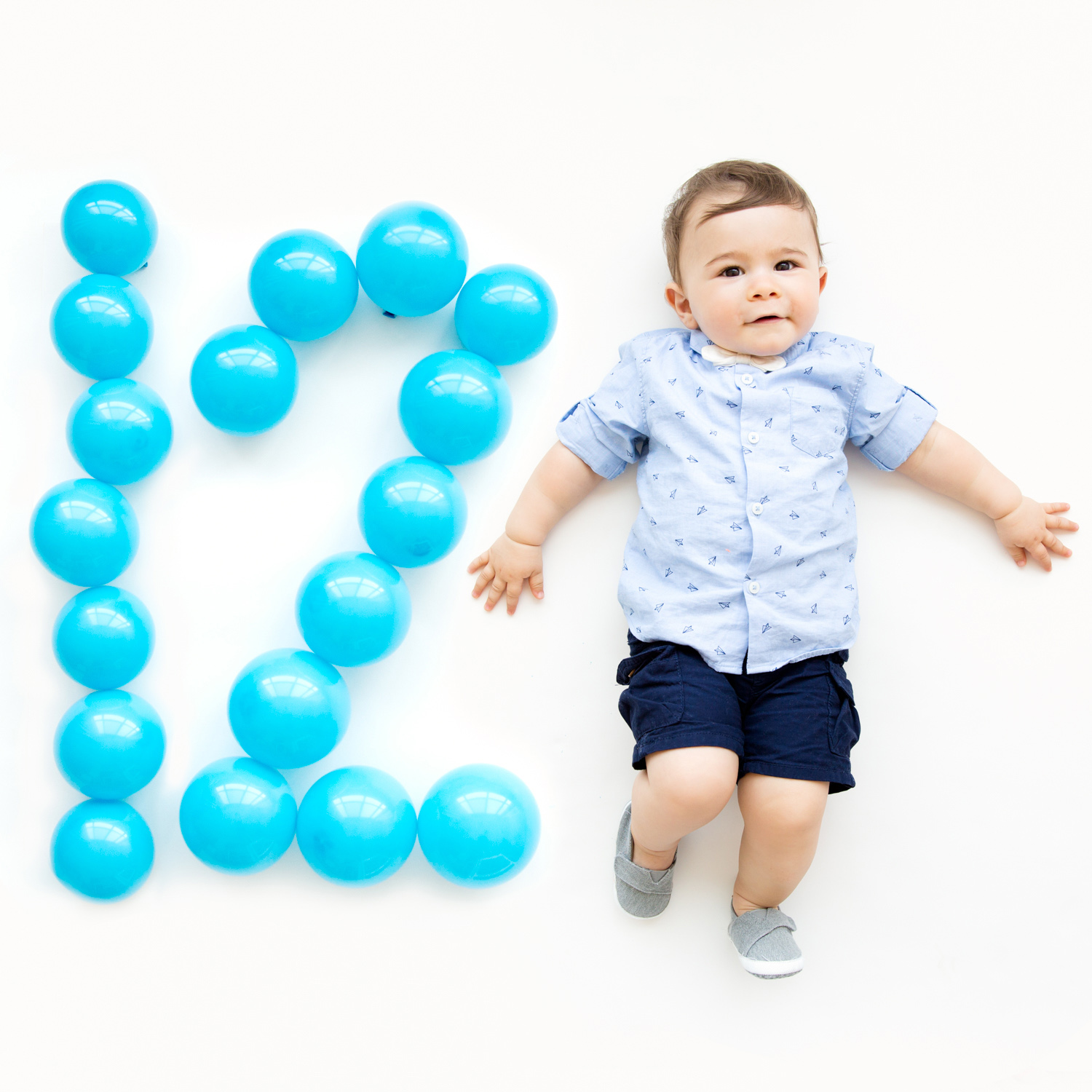 And just like that – our baby is one! We wanted to keep this one simple (as fun as this was WOW was it a lot of work – I’d do it all again though in a heart beat!).  His birthday was filled with blue balloons so we did the same for this shot along with his birthday outfit.

Keep reading for more tips + breakdowns for how you can do this with your little ones too! 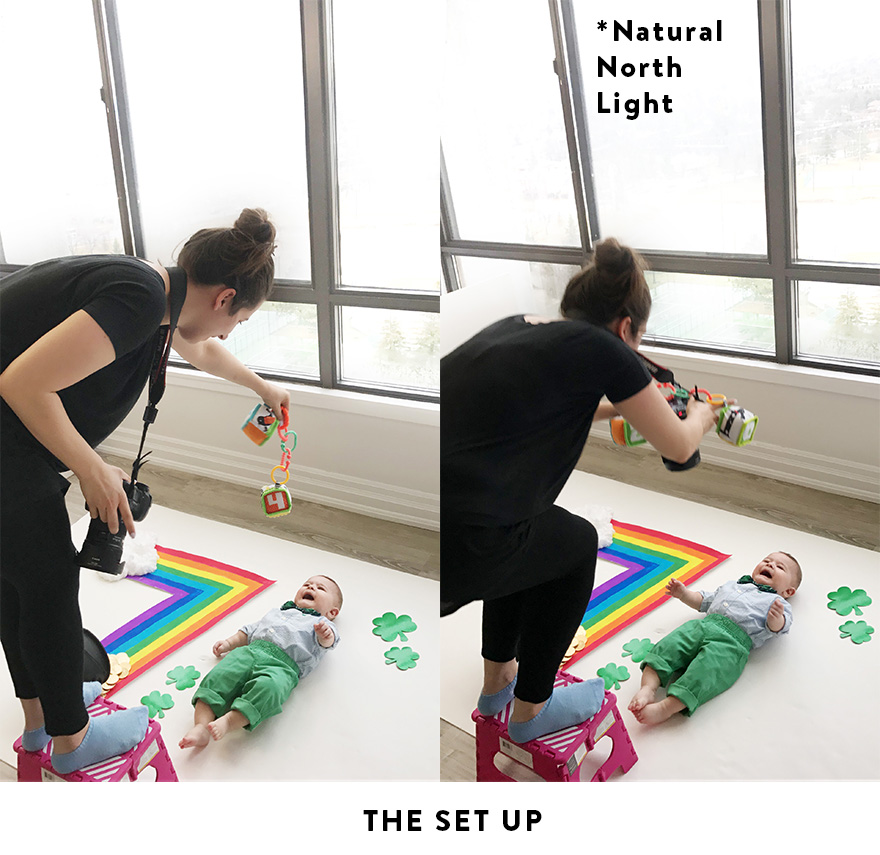 You might be thinking “I have no idea how to find the best lighting in my home!” – I got you:

Tomorrow (or today depending when you’re reading this) I want you to pay attention to how the light moves around your home.  Where does the sun rise from? For example back when I lived at home my bedroom got beautiful light in the morning when the sun was on that side – by the afternoon it would be at the other end of the house.  If I had to shoot something in the morning I’d pull my sheer curtains closed and shoot. In the afternoon I’d set up in my brothers room.

I’ve also opened up the front door to a clients home once and photographed it right there in her entry way floor b/c the light was best there once the door was open! So take one of your little ones stuffed animals and place it on the floor in different areas of your home and test to see which one looks best. You’ll get it I promise!

If you don’t know how to use photoshop no worries! There are plenty of amazing free apps you can use on the your phone.  I’d recommend: Lightroom, Pic Tap Go, Snapped & A Colour Story.  Lets you have complete control to enhance your image! Because you got it right in camera (if you follow the above set up) you won’t have to do much!

If you do know how to use photoshop you can do what I started doing once he turned 5-6 months and would be messing up the pretty sets! Photograph them separately and then put them together in post. I would take a photo of the “6” or “7” and then place him down and photograph him (I’d keep it set up next to him for scale but it would be about 3 ft apart)

Tips for making it enjoyable vs. stressful

Good luck you guys! I hope you got some useful tips that will let you capture your little ones first year! Also, I’d like to add if you didn’t do this for their first year that’s okay! Use these same trips and set ups to capture monthly photos now whatever age they are. If they are older they’ll start to understand and if you make it fun it will be a fun activity to do together every month! 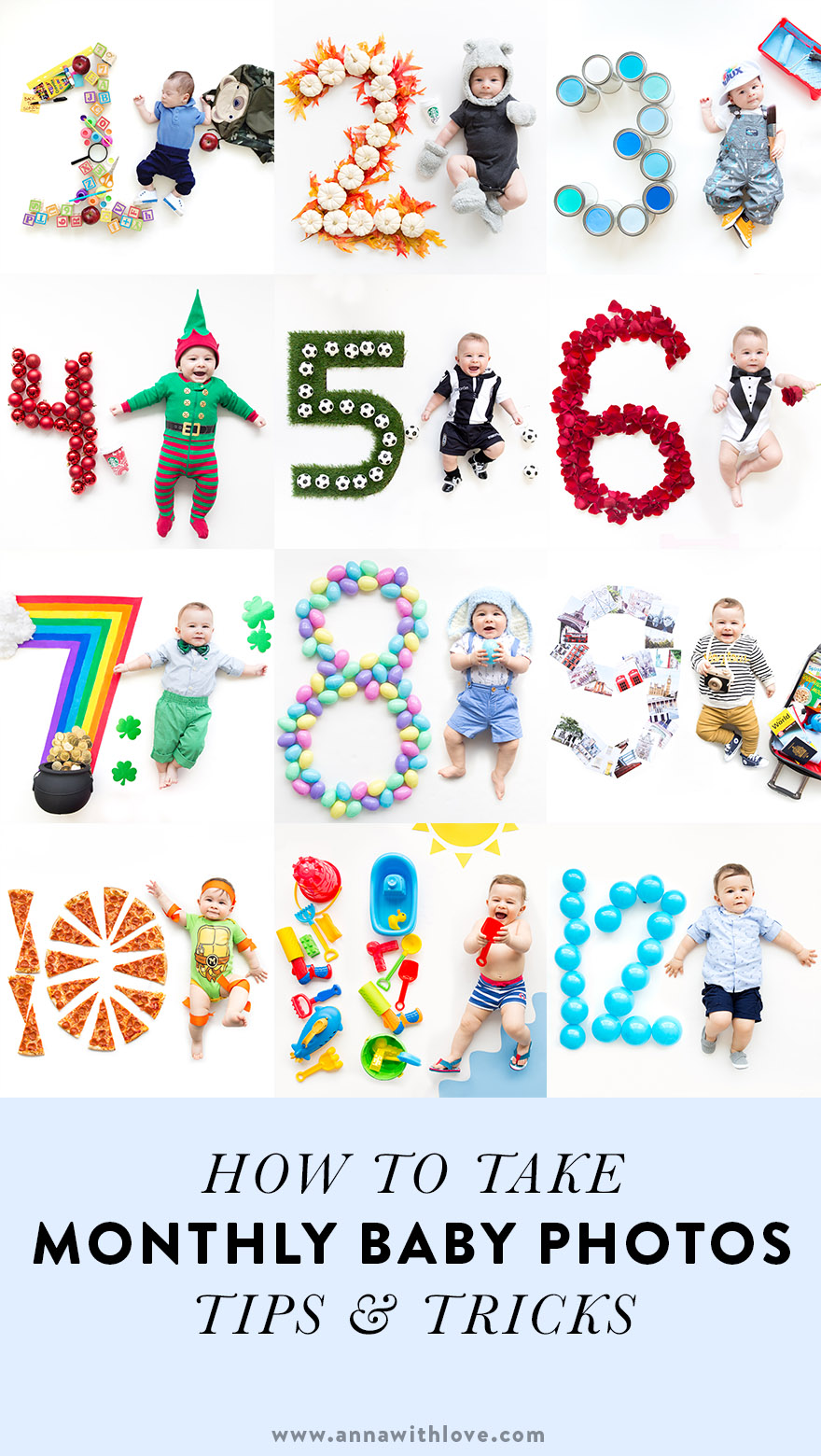 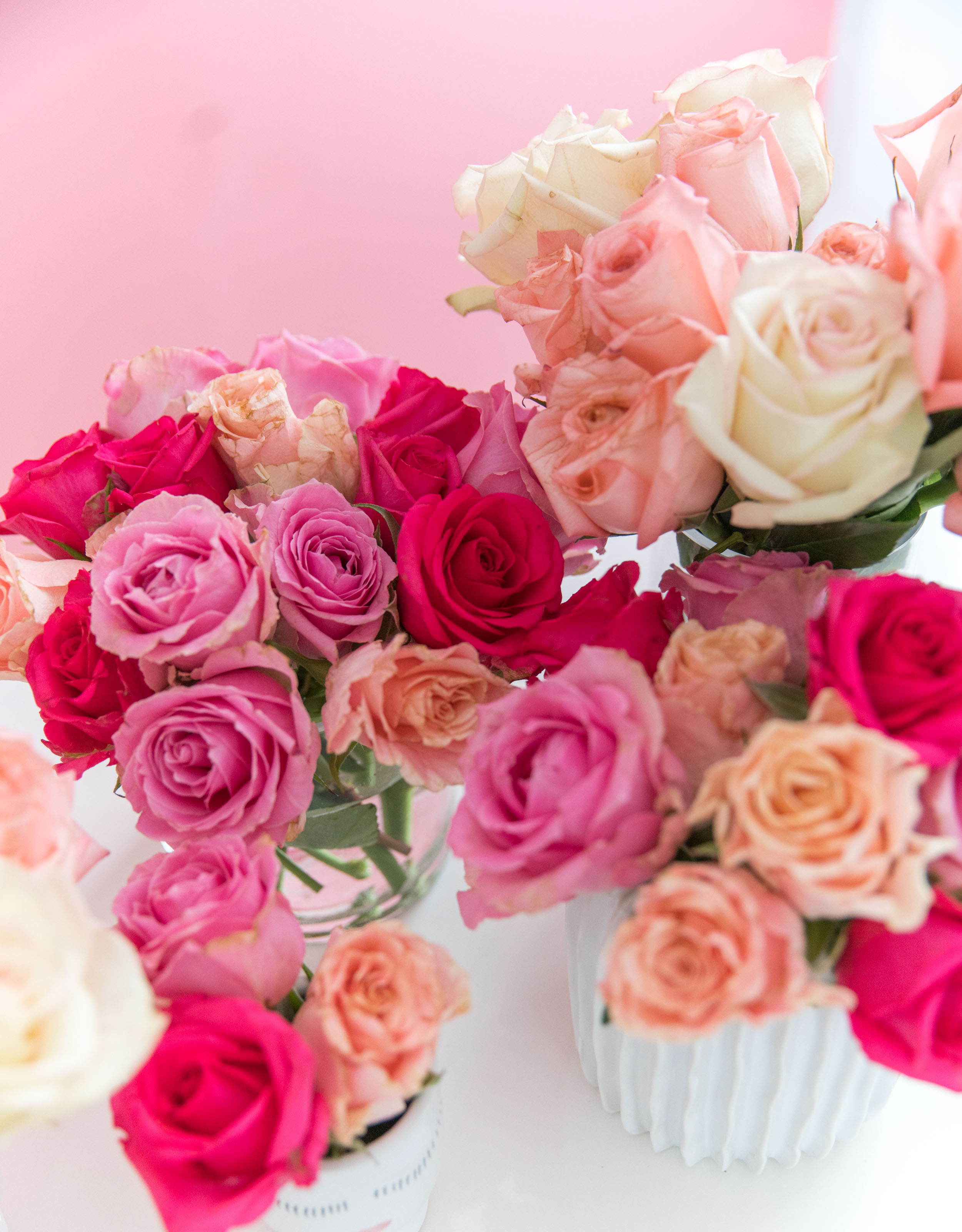 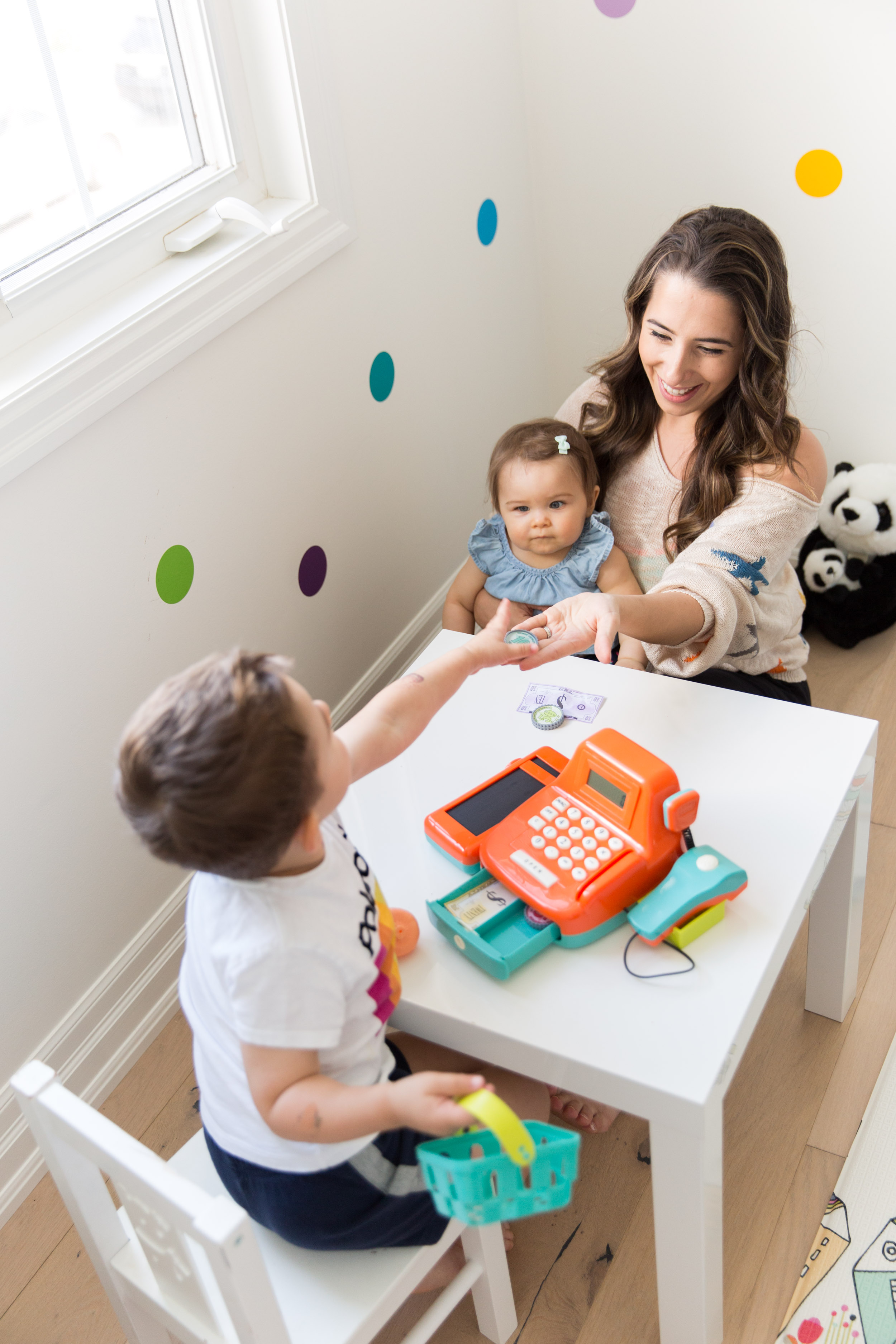 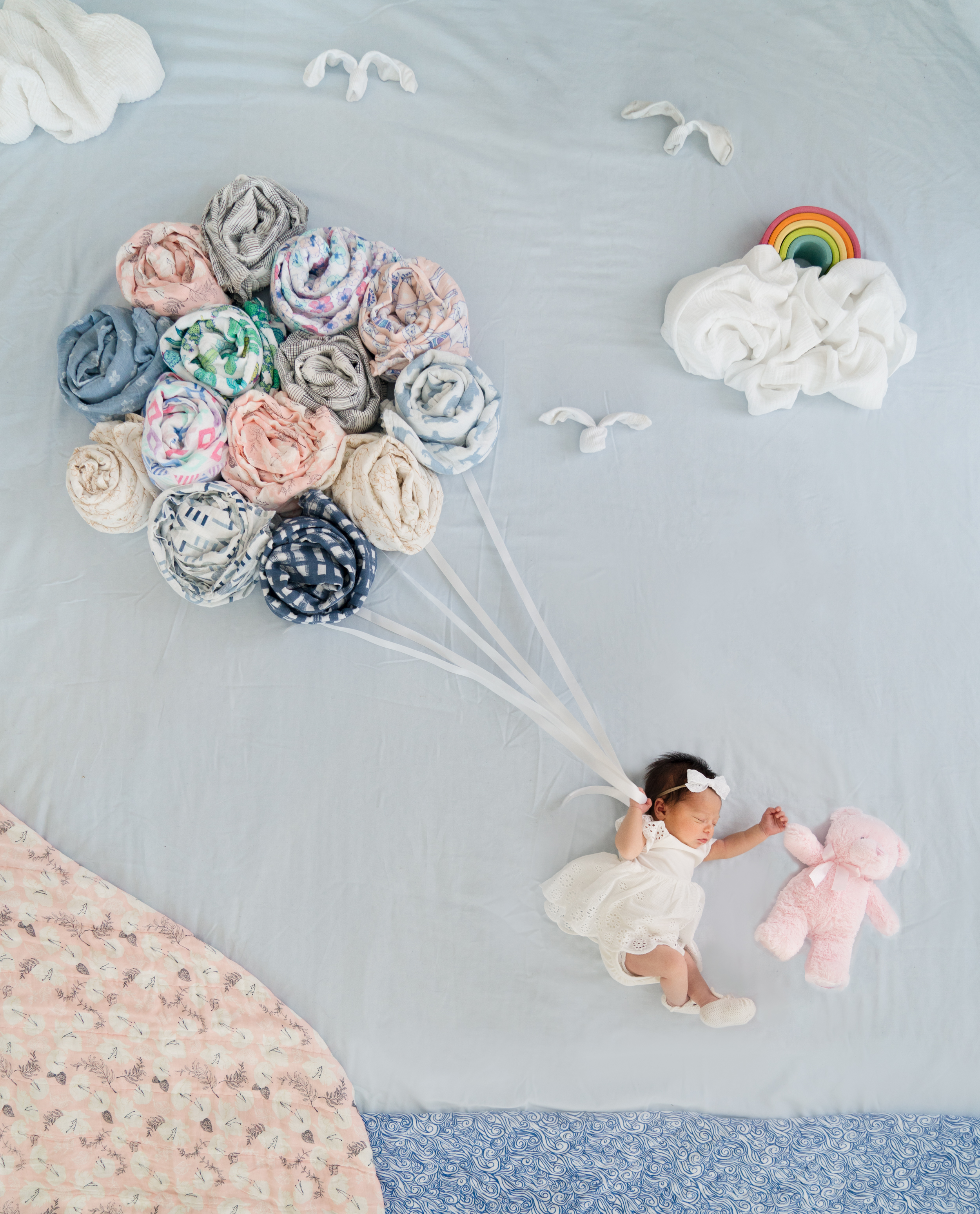 WOULD LOVE TO HEAR YOUR THOUGHTS Cancel reply